The mid-20th century ushered in an artistic renewal within the realm of fine art printmaking as artists explored the limits of this medium.

This exhibition shares a selection of fine art prints from the University Art Collection that date from the mid-1960s through the late 1980s.

On display in the McCutchan Exhibition Space located in the Wright Administration Building near Forum I. 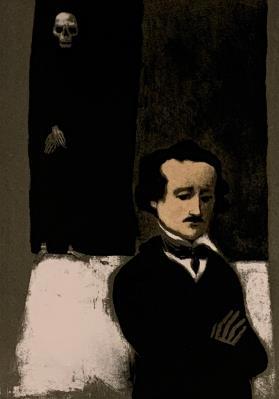 Federico Castellón's Mask of the Red Death: A Fantasy by Edgar Allan Poe

A series of lithographs based on Poe’s original version of The Mask of the Red Death: A Fantasy as published by Graham’s Magazine in 1842. 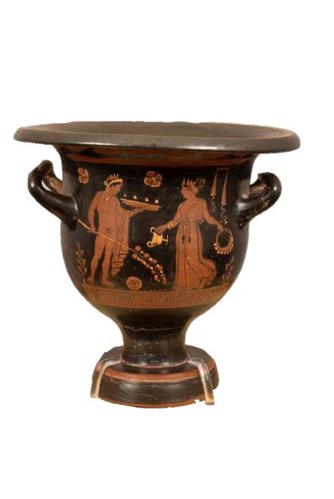 Hellenistic Krater: Examination of an Artifact

Explore the history, iconography, and the artistic process that created this ancient antiquity. About The John M. Lawrence '73 Library

The Lawrence Library exists to educate and inspire the members of the University community and the surrounding region through exhibition, research, and preservation of its collections of historical and artistic manuscripts and artifacts.

The concept for the Lawrence Library sprang from the friendship of Patricia (Patty) Aakhus and John M. Lawrence. The Library is named for Lawrence, a graduate of USI’s class of 1973 and an international expert and collector of medieval manuscripts, for his generous support of the College of Liberal Arts. John Lawrence donated many items to the Library, including a collection of medieval manuscripts as well as other artifacts, for use as a study collection for students. Patty Aakhus was an associate professor of English and served as the director of the Center for Interdisciplinary Studies and program director in International Studies. Aakhus also published three novels based on medieval texts that she studied and translated.

Patricia Aakhus served as the first caretaker of the Lawrence Library. Since her death in 2012, the College of Liberal Arts oversaw the Library until 2018 when Susan Colaricci Sauls, Director of University Art Collections, officially took over the management of the space and the collection.

The Lawrence Library prides itself on the student leadership of the space. Each semester there is a Senior Student Archivist and one to two Student Archivists that curate exhibitions, research manuscripts and artifacts, and participate in collections management and care.

Open to the public by appointment. Contact Susan Colaricci Sauls for more information.

For students. Students may investigate the collections for Honors research, colloquium presentations, and research project topics

For Faculty. Here is how faculty have used the collections.

About the University Art Collection

Pedestrians may enter the John M. Lawrence '73 Library and the McCutchan Art Center and Pace Galleries from the main level or the lower level of the Liberal Arts Center.

The McCutchan Exhibition Space is located in the Wright Administration Building near the Forums.

Find parking locations in the interactive map links to the left.

The John M. Lawrence '73 Library and the McCutchan Art Center/Pace Galleries are located on the lower level of the Liberal Arts Center.

The McCutchan Exhibition Space is located in the Wright Administration Building near the Forums.