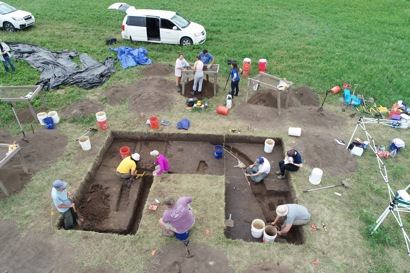 With lifetime dreams of becoming an archaeologist and a passion for ancient history, Emily Willis, Spring ‘22 graduate and anthropology major, wanted to get her hands dirty in an actual archaeological dig. During her time at USI, Willis studied anthropology and gained experience in the field through classes and lab work. However, she never got the chance to participate in an actual dig. This summer, her dream came true when she and four other USI students were given the opportunity to attend a field school with Dr. Michael Strezewski, USI Associate Professor of Anthropology, and Dr. H. Kory Cooper, Associate Professor of Anthropology at Purdue University.

The dig took place outside Fort Ouiatenon in West Lafayette, Indiana, with a goal of finding artifacts from the Fur Trade period, but the crew was surprised when they first discovered artifacts dating back to the Late Archaic period, around 1500 BC.

“The artifacts we found were interesting and cool,” says Strezewski. “But that was not the goal of our field study.”

After they had already spent weeks excavating, the crew decided to move the site around 100 meters where they detected a structure under the surface of the ground using their instruments. 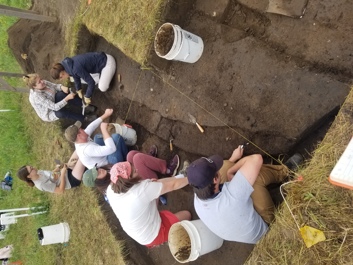 After the move, the group was successful in finding artifacts from the Fur Era including a burnt wall, pipes and pieces of knives all used by Native Americans from the time period. After their successful findings and four weeks in the field, the group concluded their dig in early June bringing back more than artifacts—the experiences had, and memories made, were immeasurable.

“The experience went beyond what I thought and wished for,” says Willis. “Not only did I gain insight academically, I also expanded my skillset in communication, flexibility and my ability to adjust to new settings within this career path.”

One thing Willis took away from her experience was to seize every opportunity you’re offered by a professor or employer, even if at first it seems scary. Willis was not sure what to expect from her first dig, but after finally getting her hands dirty she knew she had chosen the right career path and is excited to see where it takes her next.

This feature was written by Tobi Clark, a student worker in University Communications.