The Meter Reader: Aimee Nezhukumatathil encompasses "every shade of blue" in Oceanic 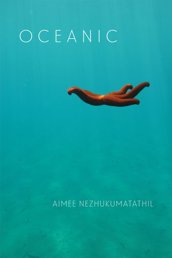 In Oceanic (Copper Canyon Press, 2018), her fourth poetry collection, Aimee Nezhukumatathil draws on the title word in a number of waves (pun intended): in one sense, these poems are oceanic, in that images borrowed from the sea’s riches swim through them (the puns can’t stop, won’t stop): whale sharks, coral, penguins, kelp and scallops all inhabit these poems. It is the other sense of oceanic—that of vastness or greatness—that Nezhukumatathil probes and pushes in these poems: what is the seed of greatness? How can we make our hearts vaster?

The word “oceanic” occurs three times in the collection, and each use complicates Nezhukumatathil’s thematic concerns. The first occurrence appears in the poem “When You Select the Daughter Card,” where Nezhukumatathil envisions a tarot deck featuring a Daughter card:

she is sometimes mistaken

for mermaid, but she can also walk quiet

on the shore, symbolizing a harmony

between earth and the dazzle of the sea.

Here the Daughter figure inhabits both definitions of “oceanic:” she is of the ocean, but also vast—she is the harmony between sea and earth; “the power flowing / through the Daughter is oceanic,” as she “symbolizes / a knowledge of the mysteries of family found / inside a mollusk.” To be oceanic is thus to be familial, is to connect and empower rather than diminish and constrict.

The second occurrence appears in “Invitation,” in which the speaker of the poem offers a heartfelt and playful invitation to “come in, come in—the water’s fine! You can’t get lost here.” In this opening riddle, Nezhukumatathil suggests “here” is not simply the ocean, but our entire earth-home: she invites us not only to look up, but also to look down, around, to realize “narwhals spin upside down while their singular tooth needles / you like a compass pointed toward home”—which is this here, this everywhere.  In the poem’s final stanza, the speaker hopes “you see / the dark sky as oceanic, boundless, limitless—like all / the shades of blue.” Again, Nezhukumatathil celebrates and draws attention to how vastness is not the same as distance—it is through the enormity and variety of life that we find connections; she accomplishes this both through the use of “oceanic” and through the line break: “like all” encompasses all life as much as every shade of blue.

“Oceanic” shows up a third time in “First Time on the Funicular,” in which the speaker and her beloved enjoy a getaway in Monte San Salvatore, Switzerland. Here, the mountain is made of “oceanic quartz” and at its peak is a “lightning museum // where you can bolt a bright coin of knowledge / into your neck.” Like ocean, quartz is abundant—the second most abundant mineral on earth—and varied: it can manifest as purple amethyst or in its pure form, be entirely transparent; furthermore, ancient Greeks and Romans thought the stone to be a form of ice—a solid bit of ocean itself. This wedding of rock to water, of mountain to ocean depth is another cue for us to commend the unfathomably complex world we inhabit as well as the complexity of our own lives; the speaker in the poem almost feels sheepish for drinking wine “over a white tablecloth before noon” before “sliding up a mountain to see about lightning.” There’s something risky, nearly perverse, and certainly radical in this kind of open pleasure in life’s gifts: while so much of our energy can be, and often is, consumed by political outrage and fear, by all sorts of existential anxieties, isn’t it audacious to seek lightning—and to do so with the one you love, the one with whom you share “the spark / the crackle, the brilliant strike between us?” Oceanic makes this bold move, to love and revel, and emboldens its readers to do so too.

While much of this collection resides in a revelatory and loving tone, while it abides often in sweetness, Nezhukumatathil’s precision of language, her capacious, compassionate voice allows her to move with liquid ease (third pun’s a charm) from a meditation on wildly painted fingernails (“In Praise of My Manicure”) to a solemn study on the lives of adolescent prostitutes in “Two Moths.” Her refusal to slide these poems into the slender arms of a “project book” is why this project succeeds: to be oceanic is to carry everything—whales as well as “their stomachs clogged full / of plastic and car parts” (“Mr. Cass and the Crustaceans”), Psyche and Cupid reimagined, The Pepper King, starfish dismantling their arms, even found poems reviewing the Taj Mahal and the Great Wall. The poems also manifest vastness formally, as Nezhukumatathil writes in both free verse and forms, such as a ghazal and several haibuns. This book is oceanic in subject, in approach, in temperament; it is determined to make a whale-song of your heart.