The Meter Reader: Analicia Sotelo's Virgin is "cheeky and tender, endearing but with teeth" 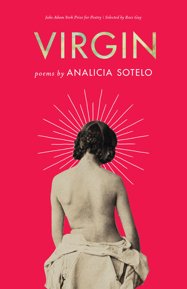