The Mysteries of Brutality: Review of Éireann Lorsung's The Century 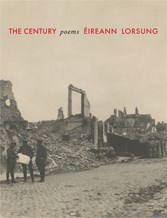 An awakening, a desperate and urgent shake of the shoulders as if to disturb our numbness and, possibly, our comfort is what Eireann Lorsung offers in these poems. The Century, Lorsung’s third poetry collection, couldn’t be any more relevant at a time of reckoning with where we are, at last, willing to look at violence and call it what it is, where white privilege and structures of oppression are understood and confronted for the threat that they are.

The book is divided into six parts and the writer threads through history, taking the reader back to 1918 when Bohemia disappeared from the map; to the voyage of St. Louis where passengers were killed in the Holocaust, “Century at Lampedusa”; to the 1991 uprisings in Iraq and the bombing of Nasiriyah where the speaker, in “Report from Nasiriyah,” looks closely at the contamination caused by the use of depleted uranium in the chemical warfare attack by U.S. military:

Whose kidneys migrate inside chest cavities. These are
facts. Never mind “never again” (those irradiated cities),

Children run out of
their own skin here.

Lorsung creates an astonishing account, and it is one that is too compelling, too political to be impersonal. In choosing language that is raw, bold and perceptive for a subject that is difficult, of painful remembrance and with a horrifying discovery of its aftermath, she has written poems that are not only fittingly challenging to read, but also a work of fierce resistance. The speaker’s uncompromising, inward-looking voice is one that startles me, but in a good way because there’s a crucial responsibility to developing an honest speaker who is not detached from the world of turmoil and dehumanization that Lorsung interrogates. It is an internal assessment that is necessary, a prying operation of the self that shouldn’t be easy to perform but is not neglected, nonetheless.

In “The book of splendor,” we see such private probing when the speaker reflects on their upbringing in a system that carves out its own history by “putting together some impressions, some facts, some artifacts, some assumptions, in order to tell the kind of story that most suits you to tell”:

My social education as a
little white girl might, therefore, be summed
up as lessons in the prevention of sensitivity. A
training in not knowing the world. S had
already, at nine, received an education about
her right to defense, her proper belongings
(body and soul), the danger of white people
(little white girls like me).

Again, in “Nuclear geography,” the speaker reiterates their identity and what it means for the world: “People who look like me, mainly, have made/ lives/nations/fortunes/ experimenting with that proposition.” There is no shying away from the horror of what happened and even more, for what role their own people played in it. What we see then is an absence of performance and, I believe, a gesture towards acknowledging the past, what it means to bear witness to years of terror and its aftermath, and responding to them. For Lorsung, the response looks a lot like resistance. It is not surprising that in her interview with The Rumpus, she talks about a work of this kind grounded in ethical directness—“an admission without confession and without a demand for forgiveness or even attention; admission of involvement as one of the facts of the matter.”

These poems, like a double-edged excavation, carry with them a zeal to uproot the mysteries of brutality, to show forth the extent of the ruins at our own hands, and insist on the need to question our very selves, our motives: too fearful to admit where we’ve fallen short, where we’ve chosen to look away as a modest witness, never a provoking unease into action. Reading The Century, I am reminded of Ilya Kaminsky’s question in Deaf Republic, “At the trial of God, we will ask: why did you allow all this? And the answer will be an echo: why did you allow all this?” Lorsung leaves us with an unflinching command, a place to begin this healing, to pay attention, to undertake a needful reconstruction: Not to look away. That “there is no excuse for not learning to see. No excuse for not learning to listen. No excuse not to work, even if the labor comes too late...” With her own summoning, she summons us, too.