The Meter Reader: Heather June Gibbons achieves a "sudsy riot of language" in Her Mouth as Souvenir 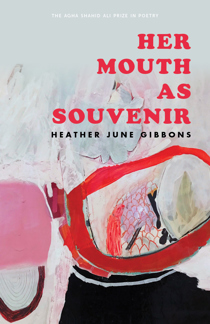 Reviewed: Her Mouth as Souvenir by Heather June Gibbons (University of Utah Press, 2018).

Heather June Gibbons’s Her Mouth as Souvenir dazzles. The poems practically vibrate off the page as they push forward to the next observation, the next joke, the next loneliness. Gibbons examines and exploits the way language heightens and complicates perception in these poems: they are at once absurd yet grounded, sincere yet gritty. They demonstrate how language muddles as much as clarifies reality.

In Her Mouth as Souvenir, Gibbons conflates pretend with reality, copy with original, memory with forgetting, mistake with the speaker’s name. These conflations often center around a slippery speaker. In “Muse the Drudge,” for instance, the “I” announces its many selves: “I, the hackneyed beauty queen,” is no “girl-wisp, nor clipped wing-tip / nor treachery of baubles.” This speaker “blow[s] shit up:” “heart-husk, wax drip, I lick you, there / now you’re licked.” Here, and in other poems such as “Self Portrait as Tongue,” Gibbons insists that the self is the starting place of misconceptions: while “Self Portrait as Tongue” starts out in an acupuncturist’s office, like many of her poems, it roams far, considering

a strange kind of convenience,

so much information without

the ability to understand it.

In this poem, the self is bothered by how it might be perceived by the acupuncturist, as well as by what it sees: we can access “so much information” but lack the facility to process it; so what to do? Carry on, her poetry suggests through the quick leaps it makes.

In both these poems Gibbons also calls attention to the multiplicity of meaning that exists in a single word; explicitly as in her definition of “cataract,” but also, in “Muse the Drudge,” through “lick” and “licked:” is the “you” physically licked or licked, as in defeated? Both, of course, and in this “bothness” the possibility of certainty dissolves: how can we know anything?

Gibbons further explores this uncertainty in the second section, with particular attention to how uncertainty intersects with desire. The second section contains a series of beautiful “Sore Songs,” which contemplate the impossibilities of desire. In one “Sore Song,” “the eye / misreads what it wants to see,” and “so too the ear hears what it needs / or what it fears, and every letter turns love letter.” Here, and throughout this section, perception beds down with longing: what we seek is often misread and it’s hard to discern need from fear. Complicating perception is our interaction with technology, a preoccupation that Gibbons returns to throughout the book. In “So Far Gone,” the speaker suggests “the most beautiful songs are the ones you can / barely hear because they are so far away,” and that “the sound of the foghorn is determined / by the landscape through which it must travel, // often overwhelming in extreme close-up / though dear when heard from far away.” Here, distance, which is reinforced by the echoes of “far away,” is required for us to genuinely connect with our affection; otherwise, perhaps due to human nature, perhaps due to our technological lives, we are overwhelmed, shut down by the conflation of device-enhanced loneliness and being out of practice with true intimacy.

Gibbons’s poetry acknowledges these troubles of modern life and participates in them, and its self-awareness suggests a kind of grace: in her critiques of self and perception, of pretend and reality, humor slides in, and with it, balm. Wit becomes the home of a capacious spirit: embrace the nonsense and some of the good stuff will stick too. In “Fill this Box with Flames,” she writes, “remember that we are not / really ourselves, but perfect // copies of a long-lost original / a revolutionary system / so gentle it removes the stone / without bruising the fruit.” Instead of fretting about the faultiness of our selves and senses, Gibbons suggests we take pleasure in it; in “I-Beam,” the poem ends: “you think what you hear is a song. // Turns out it’s just someone dusting the keys.” What’s the difference between what we want to hear, what we think we hear, and what’s actually played? Doesn’t matter, these poems suggest, and isn’t that terrifying, but also marvelous?

Her Mouth as Souvenir is one of those rare debut collections that asks more questions than it answers, opens more doors than it closes; heck, it’s inventing doors along the way. As Jericho Brown notes in his foreword to the book, “her speaker has at her access every image surrounding any single observation and all of the history that could lead to that observation.” This density of observation in Her Mouth as Souvenir is overwhelming in the best ways. These poems manifest the pleasures of complexity, the sudsy riot of language: read us again, they beckon, as if anything could be understood entirely, as if a singular meaning was attainable—as if we could do anything but revel in the failures of the heart, the eyes, the ears, and the mind.