Each Other’s Keepers: Review of Worldly Things by Michael Kleber-Diggs 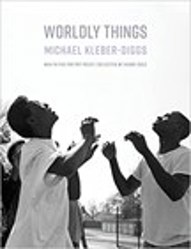 Michael Kleber-Diggs’s Worldly Things follows the murders of Black American men in America and interrogates the assumptions of what it means to be black in this country. The poems grapple with the complexities of being unseen in the black body, having a skin color that acts as a veil from oneself, and at the same time what it means to be identified by a look—to have an invisibility that is only addressed when one can be studied under a fixed description. In this way, to exist is to be in constant contention with a world that refuses to trust that you are; a world that, in its pursuit of keeping you flat on the ground, ruins itself with indifference, numbs itself with its own blindness.

This tension and divide as well as the state of feeling so trapped that one retreats into the self—the only refuge and shelter that can be trusted—is represented in this moving collection: there is witnessing of a world turning against itself, there are elegies to men who have died and the weight of their absence, ode to mothers and wives who grieve their loss, and there’s a compelling summoning for the reader to join in this witnessing, to face and question oppression and to consider a better world.

The events in “My Ultimate Thought is This” are striking: when the speaker’s friend, a former prison guard calls all convicts “feral beasts,” the poem, which is very economical for what it conveys, unfolds into what is at first a mental processing of what has just been uttered and then, what Kleber-Diggs describes as a surrender of faith when the speaker, unbounded, pounces on this man for what he’s said. What we observe first is how familiarity is used as a license, creating the impression that the speaker’s friend could make such a statement to the speaker because they “saw it fit.” And the reaction that this statement produces is so strong the speaker losses all restraint and attacks the belief. It is worth mentioning that it is the belief that is attacked, not the person. After pinning the man down and baring their teeth, the speaker resumes:

Chewing on the cheek of his claim, the next
to last thought to enter my head was this:
only a beast thinks a man is a beast.

In encountering an interaction of this kind, we’re made to see, at first glance, the cruel association between man and a savage, and what it must have taken for one to accept this as a reality and even more, be so at ease to express the thought. The ending, of course, is where Kleber-Diggs points to a message that is richly layered in the entire collection: we are each other’s keepers; the moment we stop to see each other, the very moment we lose sight of each other’s humanness, we face the highest risk of indifference, of death. Kleber-Diggs’s writing is poignant and courageously speaks to the times we’re in; with these poems it is impossible to look away from injustice and the deadly perceptions we carry with us; and even more, the damage it creates within us.

A poem that is unafraid to deal with the complexities of human relations and strip down everything to reveal our connection and responsibility to each other is “The Grove.” With stunning imagery and lyrical prose, Kleber-Diggs breaks down our constructed differences and draws attention to what lies underneath the surface. The poem is successful in provoking the reader’s imagination to perceive the human race as a grove and urging us to resee what we may be so quick to neglect—our collectiveness. Rather than embrace our twisted roots, we choose alienation: “But we are strange trees, reluctant in this/ forest—we oak and ash, we pine—/ the same the same no different.”

Kleber-Diggs seamlessly alternates between depicting the brutalities of the present and steps into a future of hope, reconciliation, unity—all of which seem heavily grounded in the urgent work of recognition and of paying attention.

Sometimes the speaker’s lungs are compressed like George Floyd and other times they plead that America’s loving them to death with “destroyed brown bodies, dismantled homes.” Sometimes the speaker assures the reader that he is not a threat but rather, the nicest man on earth and he desires for us to “carry the weight of the day together, lighten/ it.” Worldly Things brings together the isolated self and the detached world and while highlighting the terror and rage that exist between and within the two, the poems also offer a vision of people reaching toward each other, doubling their joys, pushing past every inch of invisibility to touch the other, tenderly.