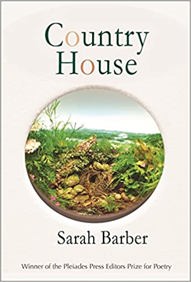 “You’re not here to feel something / about nature,” writes Sarah Barber in “The History of Landscape,” the opening poem in her new collection Country House. She writes of trees and sun with clipped but idyllic language before taunting the reader’s revelry with this proclamation: “Let me warn you / right now: they did not come into existence / to be beautiful.”

Most of the subjects of Barber’s poems are far from beautiful, however lovely the language in which they are rendered. Country House takes the pastoral form and shifts its gaze from the rocks and the rills to dumps and decay. The collection refuses the reader the escapist comforts of nature poetry, instead turning a soft light on what our modern ecosystem is comprised of: crumbling buildings, waste, industrial eyesores, and our engineered attempts to disguise it all as progress. Barber presents this trash pastoral as the new shape of the form in the late Anthropocene. We’ve poisoned the rivers, but they still catch the light at sunset.

In “Reverdie,” Barber shows us a melting snow berm behind a VFW:

I shake off the hood of my raincoat,

and the labels, faded to orange-gold,

of liter bottles of Coke. Here and there

There is little judgment in most of these passages. She even seems to find unlikely beauty, or if not beauty, than at least an objective portrait of nature as we’ve fashioned it. If our fields blow with newspapers and Walmart bags, well, that’s one set of landscape images to take in and describe. Like bird species that make their nests from our shiniest trash, Barber festoons her verses with the most colorful bits of our industrial shame.

In “Building the Waterfall,” she writes

Let this be October in Public Works’

of four-ply steel with synthetic

stones make way for those with shapelier

“I never was one for nostalgia,” her speaker confesses later in the poem, and while that certainly seems true for the most part, there is a high, golden-throated ache throughout Country House, like the slow melting of spring, in which Barber seems conscious of protesting too much. It doesn’t have to be called nostalgia—or, it isn’t nostalgia’s worst expression—to long for a better past.

She finishes the poem:

If in the parks of my childhood

they raise their tiny heads on waste.

So that river was shit. I’m over it.

Weeds will where they gorgeous will.

Those last lines offer the only glimmer of hope in these verses, though hope might be too strong a word. A clear-eyed appreciation for beauty, perhaps, even if it’s a beauty that glows suspiciously. We’ve burned this planet at both ends, but it’s given a lovely light.

It is rare in Country House that Barber’s cynicism melts completely to reveal more classic expressions of pastoral reverie, though there are reprieves. In “Why I Am Crying Into My Gin-and-Tonic,” she paints a portrait of a dripping twilight beauty, though one tinged with tears:

the person in this poem is so sad—

as if the rain had been more

than routinely violent; as if grief

were not cut with golden

She goes on to describe “crickets legging it to the heart’s / old etcetera,” and how “even the stars are getting lit.” These moments of sincere, even playful, vulnerability allow us to trust the sardonic imagery that defines most of the collection.

Barber applies the same objectivist lens to reflections on incarnation and human love. In “Lullaby,” she observes,

A pair of pins. Two grains of salt.

The spent soap split in the dish.

There is no sentimental daydreaming about being made of stardust in Country House, though that ontological wonder does get wryly applied in the opposite direction in “Housekeeping,” which begins,

Sometimes I decide to be good

at it, to croon through the house

with a broom murmuring

sweet, sweet, as if the dust

were timorous and loved me as it did

once when it was skin and hair

There are points at which Barber acknowledges her seeming inability to accept the pretty things everyone around her wants to cling to, be they nature or love or ecological hope. In “Mnemonic Feast,” she recounts her experience at a farm-to-table dinner party. With mounting impatience at the group’s masturbatory indulgence of the organizer’s sensory charades leading to the serving of the food itself, she writes, “I am hungry enough to mouth the words // they want, which turn out to be local / collective.”

Those around her, however, are invested in this sustainability theater.

...the back-to-the-landers eat it all up—

they’ve all been lovers, they all know how

to grow potatoes and milk cows

She concludes the poem with these lines that hold much meaning for the collection as a whole: “I’ll never belong here / but I’m hungry enough not to say it out loud.”

That thought offers a succinct summary for Country House. There is a chippiness to these poems that could read as misanthropic, but a closer read reveals a beating heart beneath the brutal objectivity at play here, one that sees little function in dressing up decay or calling the fractured relationship that exists between us and the world a caretaker’s intimacy. If Ottessa Moshfegh wrote nature poetry, one could imagine a similar slant, one that reads more as tease than taunt. The world is dying and we’re ridiculous apes, but there’s nothing to hate. Trash comes from the earth too, and our self-important escapades are one possible way to live.

“Yes, the heart / is an easy machine,” Barber reminds us in “The History of Landscape,” Country House’s first poem. But as she assures (or advises?) us in “Color Fictionalism,” its closing number, “the act of make-believe differs / from self-deception.”