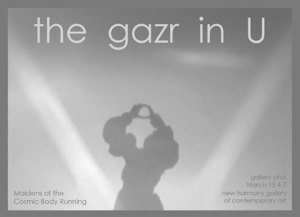 "The gazr in U," an exhibition by the artists' collective Maidens of the Cosmic Body Running, is on display at the New Harmony Gallery of Contemporary Art March 1 through April 12. The exhibition features installation work utilizing textile and video referencing the history of New Harmony as the town celebrates its bicentennial year.

The Maidens of the Cosmic Body Running are artists Denise Burge, Lisa Siders, and Jenny Ustick. A reception for the artists will be held from 4 to 7 p.m. Saturday, March 15, during the New Harmony Spring Art Stroll. The exhibition is free and open to the public.

On Monday, March 17, the Maidens will present an artists’ lecture about their work from 11 a.m. to noon in Kleymeyer Hall in the Liberal Arts Center on the USI campus. The lecture, titled “Shavasana Project for a Harmonist Farm: Maidens of the Cosmic Body Running, Vibrating the Fabric of Time and Fanning the Glowing Coals of Ascending Flames of Love in the Play of Wisdom (Dedicated to a Contemplative Society),” is the Center for Communal Studies 2014 Spring Lecture and is sponsored by the Center for Communal Studies and the World Languages and Cultures Department at USI.

Denise Burge, associate professor of art at the University of Cincinnati, received her MFA from Virginia Commonwealth University. She works in a variety of media, including drawing, film, and quilt making. Her quilt work has been widely commissioned and collected, and was included in two national quilt exhibitions. For this work she has been awarded multiple Ohio Arts Council grants and a Joan Mitchell Foundation award. In 2006, she formed a collaborative animation group called The Dozens which also includes Siders and Ustick. Their work premiered at the Fringe Festival in Edinboro, Scotland, and has been in several national and international film festivals.

Lisa Siders received her MFA from University of Cincinnati and has been an instructor in art at Northern Kentucky University and University of Cincinnati. Siders works in a wide range of media, including fibers, sculpture, and film. She also has worked as a freelance artist and designer. Her work has been featured in the Houston International Quilt Festival and the National Civil Rights Museum as well as various venues in Ohio, and in national magazines.

Jenny Ustick also received her MFA from the University of Cincinnati. Ustick has taught at several universities, most recently as visiting assistant professor of art at Grand Valley State University in Allendale, Michigan. She returned to Ohio in 2011 to teach and continue her artistic practice. Ustick works in a wide range of media, including drawing, painting, sculpture, and film. She was awarded a Wolfstein Traveling Fellowship in 2004, during which she visited several countries in Europe. Ustick also oversees the execution of large public murals in Cincinnati.

For more information, go to www.maidenprojects.com.

The New Harmony Gallery of Contemporary Art is an outreach partner of the University of Southern Indiana. The gallery is located at 506 Main Street in New Harmony, Indiana. Regular hours are 10 a.m. to 5 p.m. Tuesday through Saturday and noon to 4 p.m. Sunday. For more information, call 812-682-3156 or go to www.usi.edu/nhgallery. 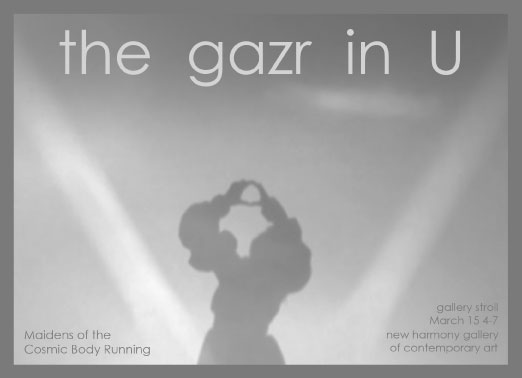