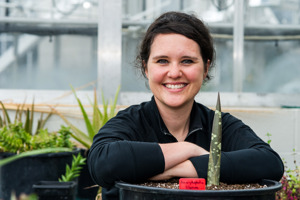 Dr. Katherine Winsett, USI lecturer in Science, Engineering, and Education, was touring a greenhouse at the University of Washington in Seattle when she was given a tuber for one of the foulest-smelling plants in the world—the titan arum.

Realizing the incredible opportunity for USI to house the world's largest inflorescence, Winsett took special care to make sure that the cantaloupe-sized tuber survived the trip back to Evansville. Titan arum tubers—also known as the “corpse flower”—are only housed at large universities and botanical gardens in the  United States and are generally not for sale.

The plant’s native habitat is the equatorial rainforests of central Sumatra in Indonesia where for most of its life, the plant will grow a single, umbrella-like leaf with complex leaflets at the top. In the wild, the main leaf can reach 20 feet tall and 15 feet wide, while in cultivation it usually grows 12 feet high before branching into a single, compound leaf. Winsett’s leaf, housed in the greenhouse on the roof of the Science Center, sprouted in August 2012 and grew to be five feet tall before going into a dormant period after four months.

Winsett hopes that her titan arum bud is one of the few that will produce a massive flowering structure, putting off its famously foul odour: “rotting-fish-with-burnt-sugar.” In the rare event that a corpse flower blooms, it’s both unique, unpredictable, and headline grabbing—typically lasting only three days.

The first time a titan arum bloomed in the United States was at the New York Botanical Gardens in June 1937, becoming a sensation. Missouri Botanical Garden in St. Louis and Franklin Park Zoo in Boston also have titan arums that recently bloomed and drew large crowds to see and smell the flower. Of the plants in cultivation, less than 130 flowerings have been documented in nearly 120 years.

The “corpse flower” is pollinated by sweat bees and flies, which are attracted to rotting meat. The smell that titan arum are famous for is composed of heavy, sulfur-based compounds that aren’t easily airborne. The plant heats itself up (to near human body temperature) and puts off a vapor to attract more flies and increase the chance of pollination. The enormous amount of energy the plant expends in attracting flies limits the amount of time it can bloom, which is why flowering typically only lasts a few days, and why they don't bloom every year. The full inflorescence, which opens abruptly, emits a repulsive scent that is strongest at night.

If flowers are successfully pollinated, the surrounding spathe eventually falls off, exposing the maturing seeds. When ripe, the cherry-sized fruits turn a bright orange-red, a color attractive to birds, which pick the berries off, digest the flesh, and excrete the pit, dispersing it in nature. Read more about the life cycle.

Winsett said what fascinates her most about the plant is that there is no pattern or growth cycle to follow. “I compare research notes with others who are growing these plants because there is no book,” she said. “Trying to keep it alive with no established guidelines to follow is frustrating at times, but also much more interesting than following directions on a packet of seeds.”

She plans to continue to chart the plant’s growth and eventually produce posters to display on campus. “For the time being, I’m measuring growth and documenting patterns,” she said. “I hope it will flower and produce seeds so I can pay it forward by giving a tuber to another colleague.”

Winsett, a botanist and mycologist by training, came to USI in winter 2011 after receiving her doctorate at the University of Arkansas, where she studied slime mold ecology. 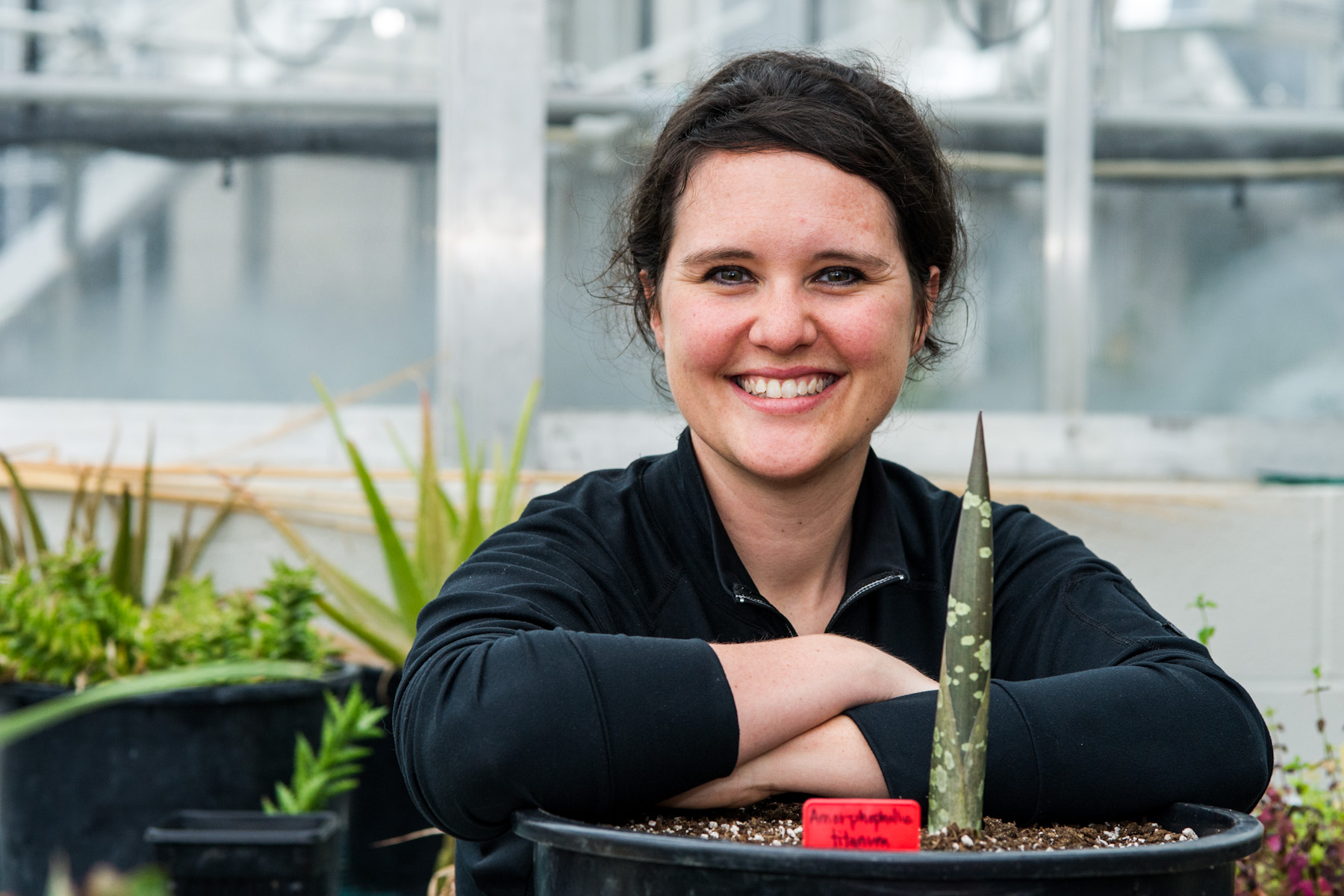 Dr. Katherine Winsett is pictured with her titan arum, which is housed in the greenhouse on top of USI's Science Center.