Volunteer USI announces 2014 Volunteers and Mentor of the Year

Volunteer USI announces 2014 Volunteers and Mentor of the Year 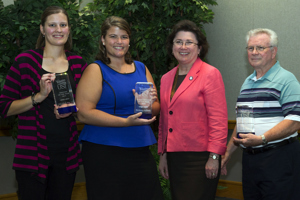 Members of Volunteer USI, the University of Southern Indiana’s volunteer organization, celebrated another successful year at the annual Volunteer USI Recognition Dinner on August 27. Volunteers contributed a total of 116,686 hours during the 2013-14 fiscal year. Among other roles, volunteers serve as tutors, plan and assist USI Athletic events and provide encouragement and critique as judges at local science fairs. They are dedicated board and committee members for a variety of groups, including the USI Varsity Club, Historic New Harmony, Parents & Families and USI Foundation.

Brittany SeDoris, a junior at USI, was recognized as the 2014 Student Volunteer of the Year. SeDoris has been a Student Ambassador since she came to USI, and was elected to the group’s executive board as membership chairperson for the 2014-15 academic year. She often is the first contact for visitors when they step onto campus, and she makes them feel right at home. This past academic year alone, she volunteered 89 hours to the Student Ambassador Organization.

“Brittany goes above and beyond the call of duty by working nearly every Southern Hospitality Day and volunteering to give extra tours,” said Koryn Parsons, advisor to the Student Ambassadors. “Not only can I count on her to show up, but I can always count on her to give our campus guests the best USI experience possible.”

David Gladys, a senior nursing student at USI, presented the 2014 Mentor of the Year award to his mentor, Elizabeth Ivy ’06. Since the spring semester of 2013, Ivy has been involved in mentoring nursing students at Deaconess Hospital. While working as a registered nurse on the oncology/respiratory unit, she adopted students as understudies and mentees. It was during one of these courses that she became a mentor to a nervous Gladys, whose experience in a hospital setting was nonexistent.

“She was an exceptional mentor to me from the beginning,” Gladys said.

When Gladys found himself doubting his decision to major in nursing, Ivy was there again to give him the confidence he lacked to continue. Since then, Gladys has taken part in a Global Engagement Internship in India where he performed assessments on children and plans to graduate this May with a degree in nursing. “I would not have had the confidence to continue with the program or own my experience in India were it not for Libby’s guidance and encouragement,” Gladys said.

Kenny Gentry, a long-time supporter of USI, is the recipient of the 2014 Volunteer of the Year award. While Gentry spreads his valued time across campus volunteering at student dinners, Spruce Up and Assessment Days, his heart belongs to USI Athletics.

“Kenny has given much of his time to help USI student-athletes and coaches over the years, and he does this while expecting nothing in return,” said Jon Mark Hall, director of Athletics. “He is always there when you need an extra hand and he never backs away from an opportunity to assist. All of our coaches have grown to admire and respect his dedication to our department.”

Kenny and his wife, Harriet, have been Varsity Club members for over 25 years, six of which Kenny served on its board of directors. He chaired the Varsity Club Fall Festival booth for the past few years, working many 14 hour days to keep the booth running as efficiently as possible. “Whether it’s taking tickets at volleyball games or selling baseball tickets in the wind and rain, Kenny takes on the task with the enthusiasm only possessed by a true USI fan and loyal volunteer,” said Mandi Fulton, coordinator of Athletics outreach and events.

“To receive this award is a true privilege,” Kenny said. “Many friends have received this award in the past, and we all love USI. To know that I am part of that group is an honor.”

Past recipients of the Volunteer of the Year award include James Dippel, Yvonne Floyd, Donna Mesker ’86 and Carolyn Ruminer, among others. Read more about past recipients here.

The Volunteer USI Recognition Dinner is held each fall for those who have completed 20 or more cumulative hours over the prior USI fiscal year. The Volunteer USI program began in 1996 and has since documented more than 1.4 million hours donated. To learn more about volunteer opportunities, visit www.usi.edu/volunteer. 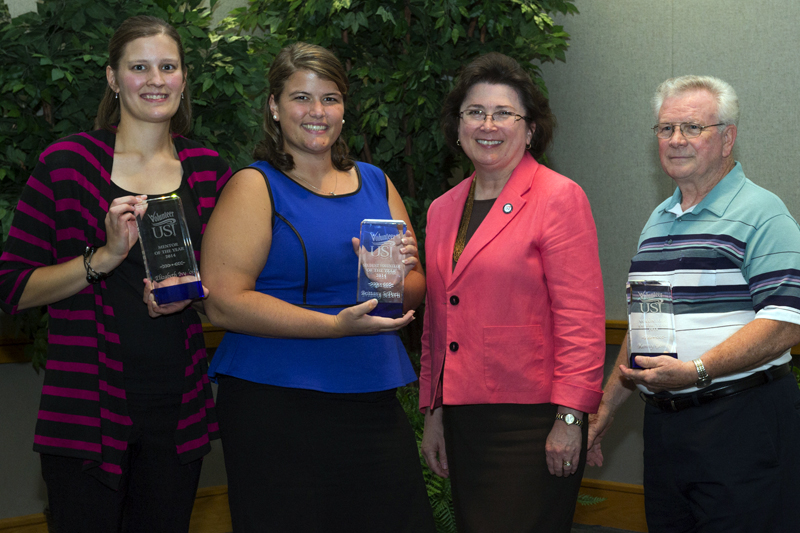