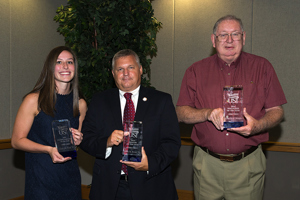 Members of Volunteer USI, the University of Southern Indiana’s volunteer organization, celebrated another successful year their annual recognition dinner on August 24. Volunteers contributed a total of 133,371 hours during the 2015-16 fiscal year.

Student Volunteer of the Year

Claire Ford, a senior food and nutrition major with a concentration in dietetics, was recognized as the 2015 Student Volunteer of the Year. While the Dietetics Program encourages volunteer work, Claire goes above and beyond to seek out her own opportunities throughout the community. “Clair actively seeks out ways to be involved in a variety of populations and roles,” said Beth Young, instructor in food and nutrition. “Clair has a natural passion for volunteer and community work.”

Originally from St. Louis, Missouri, Ford has left her mark on the Evansville community. “She is a strong role model to the youth in the Tri-state area and as an ambassador for USI,” said Mrs. Young. With a passion aimed at advocating for food and nutrition, especially among children, Ford volunteers for the Food and Nutrition Student Organization, the Evansville WIC Clinic, Interprofessional Health Education for Veteran Affairs and serves as the activities director and president of College Mentor for Kids.

Mentor of the Year

Since his time as brother of Sigma Tau Gamma from 1981-1985, Bevers has remained involved in the chapter. From being a large factor in the fraternity’s return to campus to being awarded USI Greek Advisor of the Year three consecutive years, his giving nature has transcended among the Greek community. “As a brother of Sigma Tau Gamma, we owe a lot of our incredible comeback to Mike,” said Brock Edwards, current Sigma Tau Gamma chapter president. “He has pushed us to be better brothers and to give back to our University as well as the Evansville community.”

Volunteer of the Year

Generous, dedicated and a man with high integrity are a few words used to describe the 2016 Volunteer of the Year, Charles (Chuck) Heath. Throughout his time volunteering for USI’s Art Department, Heath has influenced not only the level craftsmanship within the workshop but the technique. “Chuck has donated his time, knowledge and wisdom to students, helping them to work more safely and productively,” said Rob Millard-Mendez, associate professor of art.

Heath’s sense of humor and warmth adds much to the student experience in the woodshop, leaving a mark on each student he works with. “Chuck’s generosity and dedication to hard work are exemplary. Many students who have shown interest in service projects cite Chuck as a person to emulate,” said Millard-Mendez. 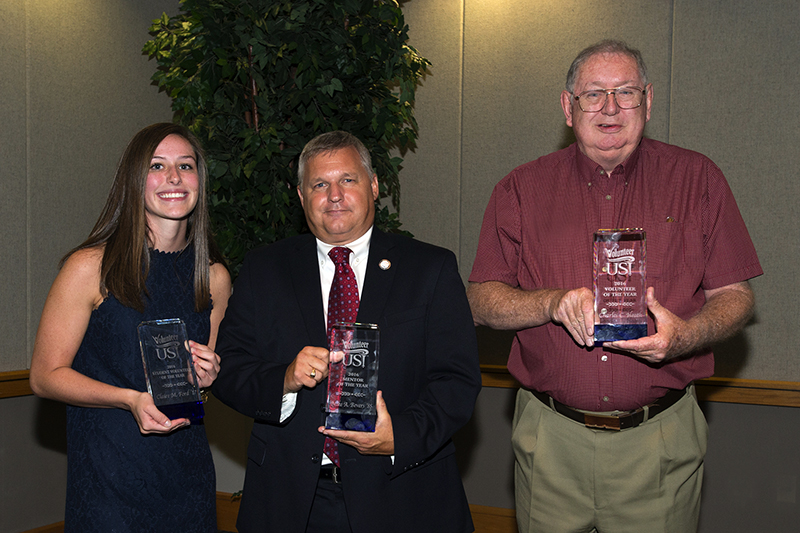