The show(s) must go on: How USI Theatre is safely performing through a pandemic

The show(s) must go on: How USI Theatre is safely performing through a pandemic

Theatre majors Eve Pigman ’23 and Kyle Burgess ’21 were preparing to return to campus for rehearsals of the department’s spring musical, Little Shop of Horrors, when USI announced Spring Break would be extended because of COVID-19. “I was like, ‘What does that mean for our show? Are our rehearsals going to be extended?’” Pigman recalled. 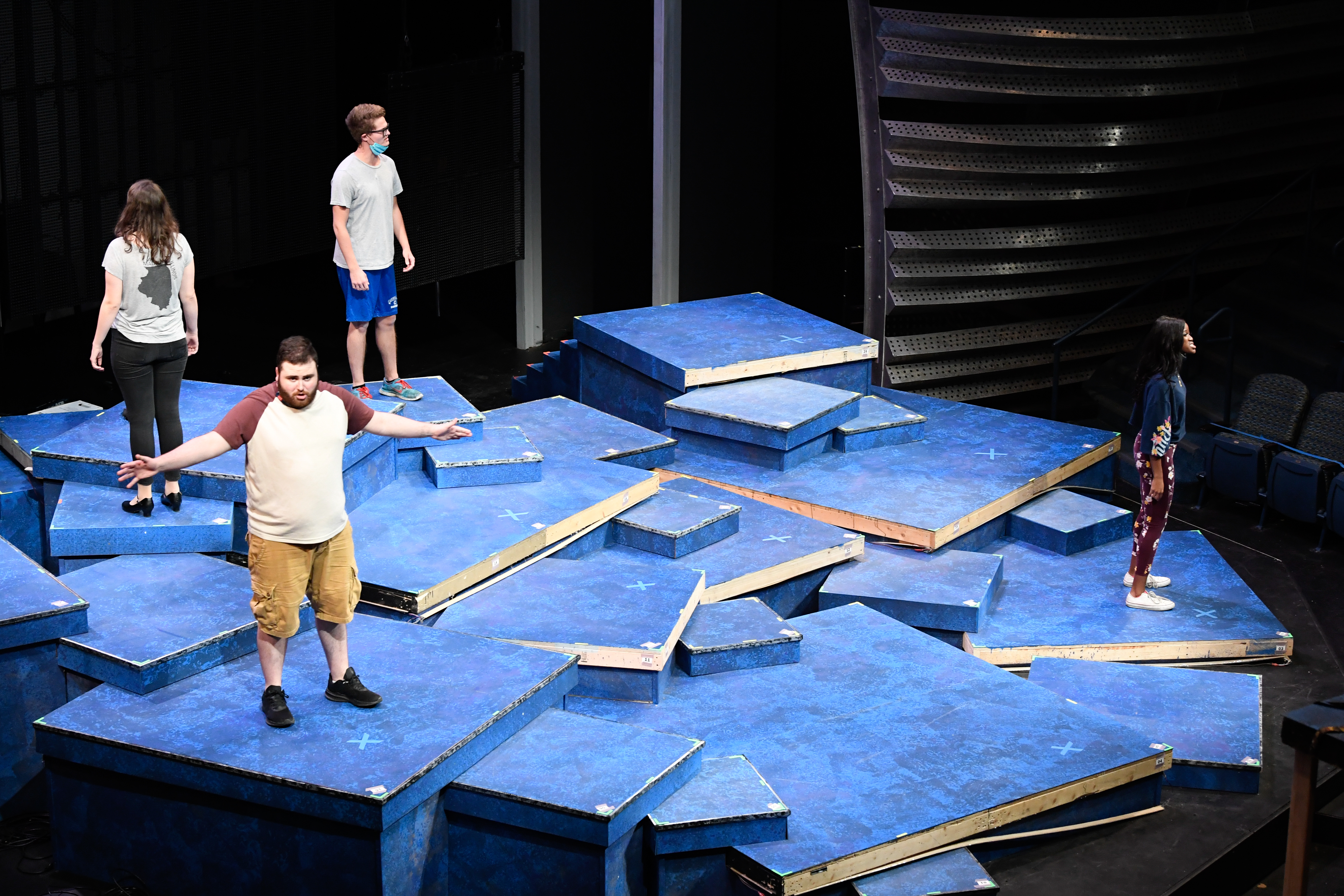 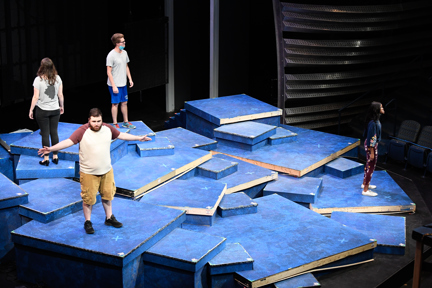 Uncertainty turned to heartbreak as they learned their production and the all-female, student-directed show Eclipsed, just days from opening, would not see the stage.

“It was gone like that,” said Pigman. “We just got an email, and it was gone.”

“I cried for two hours. I was devastated,” added Burgess. “It was the same day Broadway announced that they were on a shutdown for COVID, and that devastated me as well because that’s kind of like my dream, to go to Broadway and audition.”

“To add to the difficulty of it, we weren’t really there to hug them and tell them it was OK,” explained Eric Altheide, Associate Professor of Theatre.

“It was the right choice, but that came with a very steep cost,” said Burgess. “We were all hurt.”

Which is why he and Pigman were hesitant to get their hopes up this fall. Though they longed to return to the Performance Center, with universities canceling productions for the semester—and, in some cases, the entire year—they knew more disappointment was possible.

While they waited for a decision, Altheide and Elliot Wasserman, Chair of USI’s Theatre Department, got creative. 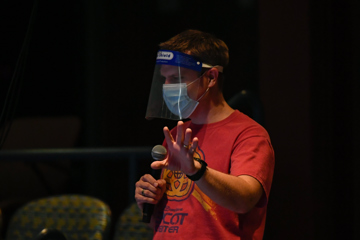 “We tried to figure out different approaches,” Wasserman said. “I tried to brainstorm plays where actors in masks could fit within the metaphor of the show, the concept of the show.”

They even considered adding masks to productions without an obvious connection. “Theatre reflects life, and this is the way we live now,” added Wasserman. “But that is not a very satisfying theatrical formula for every show.”

After much consideration, and with support from Dr. James Beeby, Dean of the College of Liberal Arts, and Dr. Mohammed Khayum, Provost, the directors ultimately moved forward with two productions, replacing the shows they’d selected before the pandemic with options that more easily cater to the current restrictions—Songs for a New World and It’s a Wonderful Life: A Radio Play.

Both Burgess and Pigman, who’d been understudies in Little Shop of Horrors, eagerly auditioned for Songs for a New World, a musical medley or “song cycle” with just four acting roles; the radio play has six. “When the cast list came out [and I learned I would be in the production], I was just elated,” recalled Burgess. “I was in my kitchen eating lunch, and I jumped up and down like a kid on Christmas.”

Pigman learned of her casting alongside her roommate, who is also her understudy; they’re enjoying the “light” theatre is providing at the end of a tunnel darkened by COVID-19. “I think they [Wasserman and Altheide] knew that it would help our mental health to be able to be part of a show, because not having anything, I think, would make it feel very bleak,” said Pigman.

Coming together and staying apart

Altheide chose Songs for a New World partly because of its small cast, but it’s hopeful theme also resonated. “After the spring lockdown, hearing the music and the way the words spoke to me, I chose it because I wanted it to be ‘of this time,’” he said. 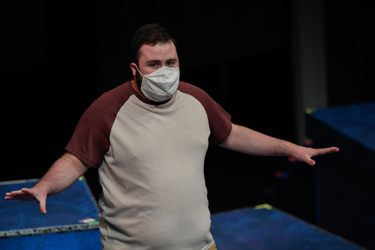 “The first line I sing in the very opening is, ‘A new world calls across the ocean,’” explained Pigman. “That line is so relevant to me, because right now I think we’re in a brand-new world, everything is shifting, we don’t know how long it’ll be …. It is talking about a new world, but it’s also a big show about unity and coming together.”

As they figuratively unite, actors are literally keeping their distance. For weeks, typical four-hour, full-cast rehearsals morphed into 45-minute individual or smaller group sessions with 15- to 20-minute breaks so everyone could clear the room. Students wear special “singing masks” and limit instances in which they cross each other on and off stage. “I don’t want this to be the process for the rest of our lives, but it hasn’t been as limiting and odd as I would have assumed that it would be,” said Altheide.

Live audiences are on hold during the Fall Semester, so performances will be pre-recorded for paid, ticketed online viewing, with theatre students operating the cameras—another first. Songs for a New World, which runs about 90 minutes, will be recorded three times, then edited together. “It allows the actors to perform without masks [because they are distanced from each other and] we can stop in between songs, put the masks back on and follow the same timing protocols that we did during rehearsals,” Altheide explained. “Actors will put their masks on as soon as a number ends and remain masked until their next number.”

Rebecca Lutton, Managing and Marketing Director of USI Theatre, is navigating the increased licensing and copyright issues involved in the recording and broadcasting process. “Before, we couldn’t record [performances] at all, so we couldn’t show the [prospective] students exactly what we were doing,” said Lutton. “This will hopefully have a good impact on recruiting.” 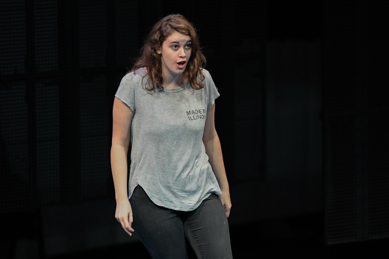 The recorded shows could also prove useful for current students applying to graduate schools or for jobs, allowing instructors and employers to see their work more easily. And, students’ family and friends who couldn’t ordinarily travel to USI to watch a live performance can now watch from home.

No one can dispute that challenges abound amidst the pandemic. But as USI Theatre is proving, so too, do opportunities.

“Anytime you get a fresh set of challenges that push you outside your comfort zone and force you to innovate and try new things, you can always make something positive out of that,” said Wasserman. “We can’t solve COVID; we don’t have that kind of expertise. But we perform a very vital service to our culture, and we’re going to continue to do that, to find ways to do that. Our program is just one small cog in the larger machine, but be assured, our cog is going to turn.”

Pigman and Burgess are just excited—and relieved—to once again be working on their craft and creating new memories.

“It is definitely different with masks, but it doesn’t really matter to me. As long as I’m doing theatre and something that I love, I would not have it any other way,” said Burgess. “I feel fortunate to still be doing what I love with the people that I love.”

Songs for a New World 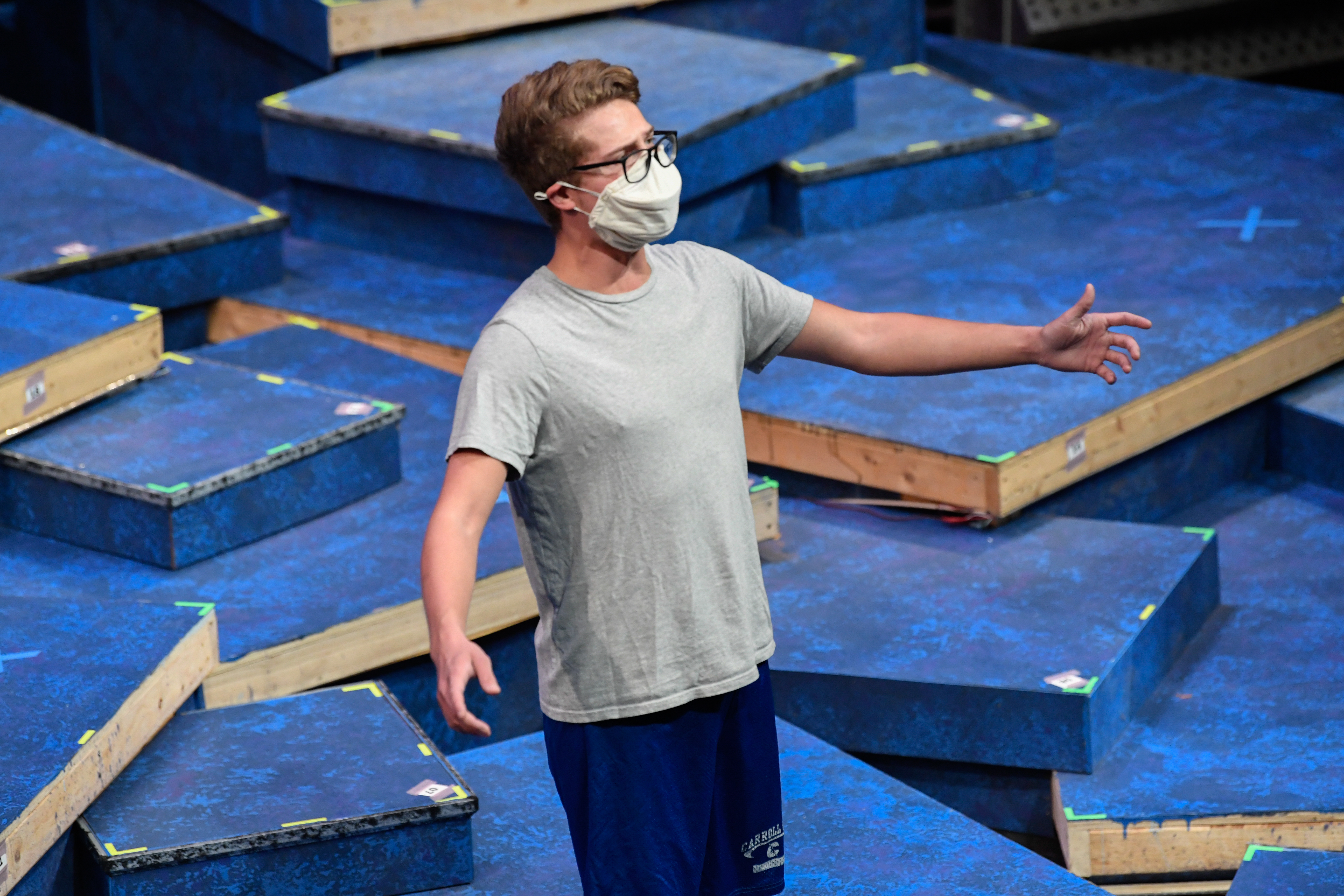