USI Theatre is proud to open its 2021-22 season with a return to live performances!  The first production of the season, The Mad Ones, is a new musical written by Kait Kerrigan and Bree Lowdermilk and directed by USI Associate Professor of Theatre Eric Altheide.  The production runs from October 14-17 in the USI Performance Center located in University Center East on the USI campus.

Concord Theatricals, the producing company of The Mad Ones, writes: “Eighteen-year-old Samantha Brown sits in a hand-me-down car with the keys clutched in her hand. Caught between a yearning for the unknown and feeling bound by expectation, she telescopes back to a time before her world had fallen apart. As she relives her senior year, we meet Sam’s well-intentioned helicopter mother Bev and her high school sweetheart of a boyfriend Adam, but it’s her painfully alive best friend Kelly that haunts her. Kelly was everything Sam is not – impetuous and daring. She pushed Sam to break rules and do the unexpected. When Kelly is killed in a car wreck, Sam loses not only her best friend but also the part of herself that was learning to be brave. Now, Sam has to make a decision: Will she follow her mother’s dreams for her, or will she summon the courage to drive away from her friends and family into a future she can’t imagine?”

Tickets are $2 for USI students, $10 for USI employees and alumni, $4 for non-USI students with student ID, $10 seniors (60+), and $12 for adults. Tickets are FREE to USI students with ID one hour before the show begins based on availability. Shows start at 7 p.m. Thursday through Saturday and 2 p.m. for the Sunday matinee. To purchase tickets, or for more information, visit USI.edu/liberal-arts/usi-theatre or call the Box Office at 812-465-7110. Follow us on Facebook at USITheatre and Instagram @USI_theatre for updates and photos.

Tickets are also now on sale for the rest of the 2021-22 season. Join us for A Christmas Carol, adapted and directed by USI Professor of Theatre Elliot Wasserman, from November 18-21, 2021. The first show of the Spring Semester will be Stop Kiss by Diana Son and directed by Altheide, running from February 17-20, 2022. Our final show of the season will be William Shakespeare’s Twelfth Night, which will run from April 21-24, 2022. For more information on the remainder of the USI Theatre season visit USI.edu/liberal-arts/usi-theatre or call 812-465-7110. 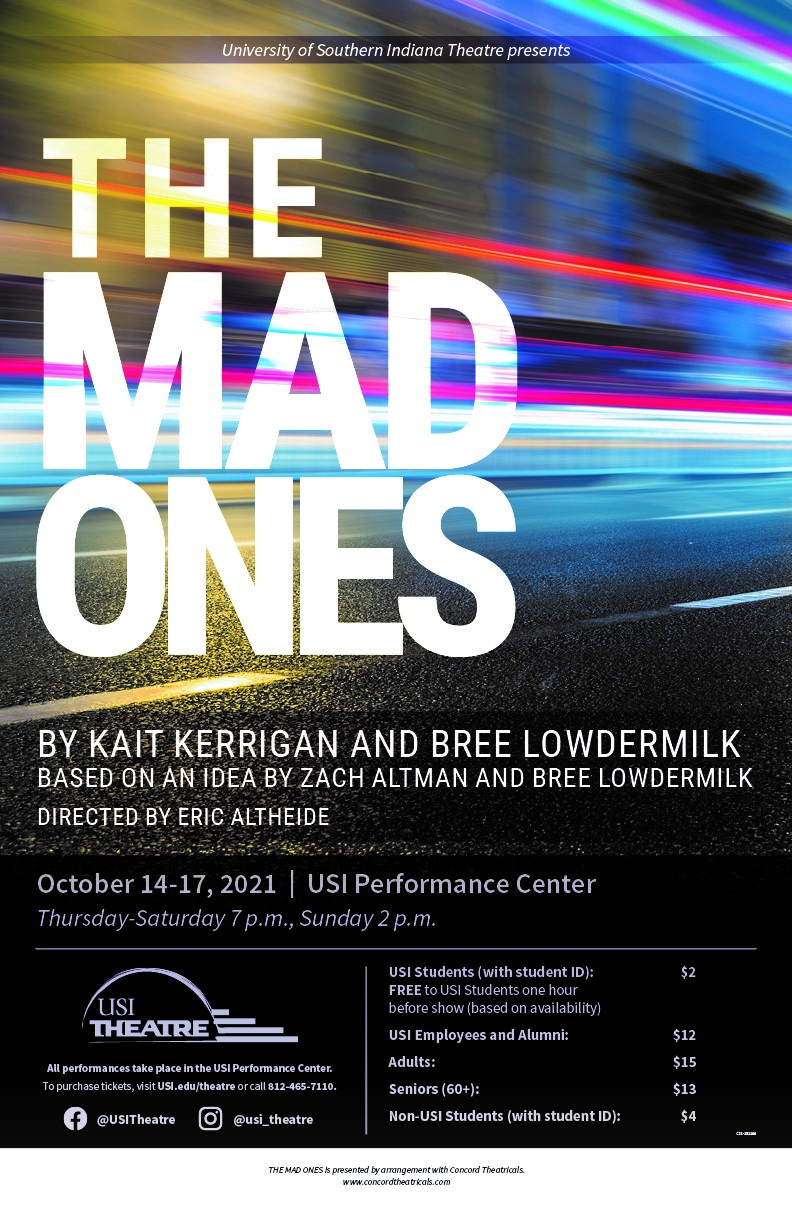